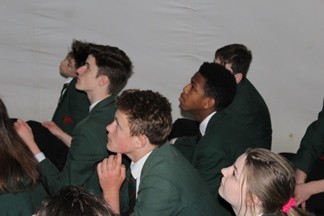 On Thursday 17th March, some selected classes were lucky enough to experience a tour of the night skies and beyond as we were visited by Auriga Astronomy who brought along their astrodome as part of science week 2016. As part of an A-Level physics class, we got an insight into what it might be like to study astronomy and cosmology at a higher level, as well as being taught about some extra-curricular topics including time dilation, Einstein’s theory of relativity, and his recently proved theory of gravitational waves. The show was really engaging and interesting, and whilst being quite mind-bending in places, it was a great way to be able to experience such high level topics of both modern and classical physics in an interactive way.