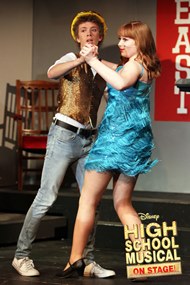 A girl and boy from opposite worlds fight social ostracism, to find true love in high school: Troy Bolton and Gabriella Montez, the hero and heroine of “High School Musical,” battle peer pressure and self-doubt on the rocky road to romance.

Neither the studious Gabriella nor the basketball ‘jock’ Troy is forced to abandon a “clique”; instead they assert their independence from cultural oppression – the “status quo” – by declaring their allegiance to each other and finding fulfillment and individuality by auditioning for the school musical.

Max Cawthorne in the role of Troy, the captain of the basketball team who discovers his inner drama geek, embodied his role with tortured angst; Makala Hall was charmingly demure as Gabriella; Felicity Grimes flounced capably as the haughty, histrionic villainess Sharpay and Nathan Stroud perkily portrayed his role of Sharpay’s brother Ryan with catty quips and meticulous comic timing.

The objectionable ‘Coach’ standing against self- expression and in the path of his son Troy’s happiness – of course you can’t sing AND be sporty – was the boldly authoritative Dominic Selvey. His nemesis in drama doyenne Ms Darbus provided a perfect parody and sharp, comedic foil characterised with ease by Ruth Norman.

The supporting cast of the leads’ friends were adroitly acted by Steven Reyes, Andrew Pegg, Anaya Kundi, Lana Docking, Robin Skeppstam, Phoebe Scholtens and Isobel Cowell- who all had their individual moments to shine – ably bolstered by an energetic and enthusiastic chorus of Braniacs, Jocks, Cheerleaders and Thespians.