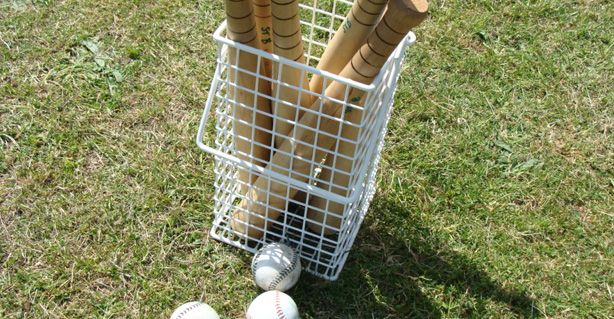 On Tuesday the U9 A & B teams had their first rounders match of the term. Both teams started off very positively scoring several rounders during the first innings. However, the weather was against us and half way through, play was ceased. Bizarre diverse weather conditions! This meant, sadly the second innings were not completed.

Thank you to the several Year 3 girls who mixed in with Year 4 to allow two matches to take place.

Thank you also to the parents who came to support the girls and braved the weather conditions!

On Wednesday the U11 A team had their first fixture of the Summer Term. However, despite expecting some lovely weather, the girls were very unlucky and faced some extreme weather. Play started battling the very wet and wintery conditions.

During the second innings Winchester House started out very confidently scoring several rounders early on.  As conditions worsened and the Astro became increasingly slippery the Akeley girls struggled to stop the ball.

Regrettably, just as it was Akeley’s turn to bat the heavens opened drenching us with a heavy downpour of hail stones. Naturally this made it very difficult for the girls to see the ball when batting. However, they gallantly continued in very good spirits, despite struggling to score many rounders.

Thank you to all the parents who braved the weather to support the girls.

U11 Rounder’s B Team

On Wednesday 26th April the U11s headed to Winchester House, with dark clouds looming overhead we were unsure if the match would actually go ahead. Surprisingly it did! Sadly, we only managed to fit in an innings and a half before the weather stopped us.

The girls played amazingly well despite the hail whipping their legs and stinging their hands and their eyes.

All worth it! Coming away with the first win of the season. Well done girls!

A big thank you to Amelia Mead who stepped in at the very last moment and bowled beautifully consistently throughout the match. Also very well done to Lydia and Lucy Phillipson- our top scorers on 4 rounders’ each. Lastly well done to Hattie who took on back stop for the first time and played fantastically, showing excellent decision making and accurate passing. It was a great team effort and so nice to see the B team playing tactically.

I am so impressed with you all. Well done!