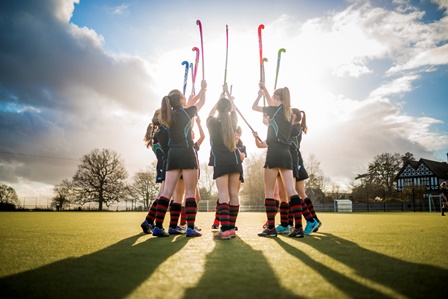 On Tuesday 27th September we traveled to Tudor Hall for our second match of the season. In the first half our defending was effective and we scored twice while keeping the opposition away from their goal area.

After half time talk from Miss Charsley we started the second half even stronger and scored anoither two goals. Our attacking and defending were more convincing and we did not let in any goal.
Our scorers fro the match were Keira an Annabel. Julia and Keira were chosen players of the match by the Tudor Hall team.

Akeley U14 hosted Stowe on a day of torrential downpours. Both teams started well and whilst Stowe prepared wave after wave of attacks, these were admirably repelled by the rocks of the Akeley midfield and defence, especially Megan Thompson and Alana Swain who worked tirelessly for the team. On the rare occasions that Stowe managed a chance on goal, Katie Wright stormed from her goal line to thwart any attack and again produced some crucial saves to ensure the score at half time was 0-0.

The second half started much as the first had finished, with the Akeley girls sticking doggedly to their jobs, preventing Stowe from breaking through. Midway through the second half, with the rain still coming down, the tide turned and Akeley started to apply some pressure on the Stowe goal. Great passing in the midfield by Charlotte Pearson, Megan Ponte and Miranda Balch saw Miranda break wide on the right, sail past their defence and deliver some telling crosses into the D. The Stowe keeper had to be at the top of her game to prevent Akeley scoring, as several chances battered the Stowe defence.

Both sets of players began to tire and whilst Stowe continued to try and breach the Akeley defence, a 0-0 draw was looking ever likely. With 30 seconds of the match left, some confusion arose with the Stowe umpire blowing for a foot foul against Akeley but not stopping the game. This confusion was enough to allow Stowe to break through and score the only goal of the game winning the match 1-0.

The Akeley girls had performed admirably and were fantastic ambassadors for the school on this rain soaked afternoon and their coach would like to thank every one of them for their team-work, focus and determination against a very well prepared opposition. A return match would no doubt see another thrilling game, with adifferent outcome.

Wednesday 21st September Akeley U15s took on Stowe in a nail biting game. In the first half both teams were determined, defending hard and ensuring neither team could get near the goal. In the second half Stowe took advantage of the gaps and managed to break through with 3 impressive goals in the second half. However, the girls were not defeated and have set themselves targets to improve on. Their next opponents need to watch out!

Thank you to those U14s who played  and Megan Thompson for playing in goal.