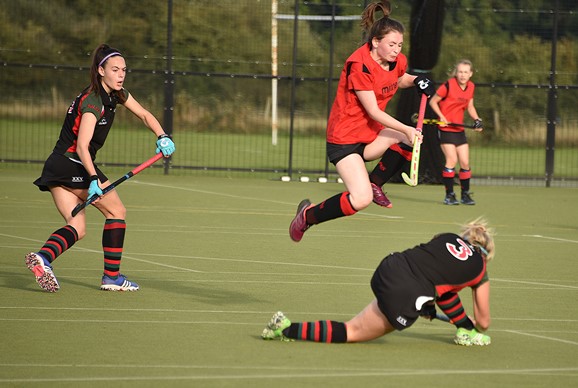 In a rivalry that is steeped in history, Akeley Wood vs The Royal Latin is the fixture that teams from both sides target from the start of the year. Unfortunately in more recent times the matches have swung the way of the enemy however this year our U12s, U13s and U14s have had a clean sweep winning 35-5, 10-5 and 40-17 respectively. With the 1st XV still to play (correct at the time of writing) on the last Wednesday of term in a double header with the 1st XI Hockey a potential historic season is in the making and things look bright for the future.

Tom Sandiford was outstanding against Wellingborough, scoring four tries. Two of which were from inside his own 22. He also had an outstanding game defensively making countless thundering covering tackles and knocking the opposition into touch on numerous occasions. Akeley triumphed 43-34 against a strong Wellingborough side.

U12&13 hockey teams roar to success at Lord Williams

Both the U12 and U13 travelled to Lord Williams and both with enormous success. The U12s stormed to success with an 11 – 0 win and the U13s battled until the very last minute of the game where they were awarded a short corner resulting in a win 5 – 4.

The Akeley tourists enjoyed a successful trip to Dubai. Key successes came in the football matches where the boys ended up with a 100% win record, with victories against the Desert Rangers and Cambridge High School. In the rugby, the boys came up against strong opposition in tough conditions, however the boy’s hard work and determination shone through for which they should be commended on. Outstanding contributions went to Morley Spinks (football) and James Bell (rugby).

Akeley Wood School proudly hosted a series of 7-aside hockey tournaments for the sixth consecutive year.  In early October, the astro-turf was bathed in Autumnal sunshine for the week of tournaments which included a U12, U13, U14 and an inaugural U11 competition.  Over 240 girls attended the tournaments over the four days and the schools in attendance included Cokethorpe, Royal Latin, Northampton High, Waddesdon, Thornton College, Sir Thomas Fremantle and Quinton House.  The tournaments were played in excellent spirit and were well supported by parents from all Schools.  We look forward to welcoming all the girls back in 2017!

It has been the first time in the past 6 hockey seasons we have not had a fixture cancelled to the Arctic British weather, and we have been able to ‘let it go’ on the astro for the whole season.

The first team have had some fantastic performances against Stowe, MSC Oxford and the biggest being against our local rivals The Royal Latin. Both teams searching for the back of the net and the battle of skill, nail biting for all the spectators and even the umpires. The girls have worked hard to nail their formation and worked hard on setting their press early and switching the point of attack to outwit their opponents.

I would like to take this opportunity to thank all the parents who fill the side lines and support hockey at Akeley and to all the players for their outstanding effort and commitment to what is truly the most exciting sport. I wish all the players good luck in their involvement in hockey in the future, Akeley certainly has some outstanding players with inspiring talent.