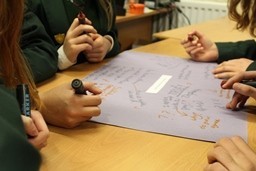 In their Philosophy and Religion studies, Year 9 are spending this term looking at the question of “Why do we suffer?”.  This week they considered whether or not suffering can have a purpose.  In other words, is suffering ever good for us?

To conclude their lesson, and draw on what they had learned, they held a silent debate.  Split into four groups, each was given a different statement such as: ‘Life would be perfect if there was no suffering’, and: ‘It doesn’t matter how good the result, suffering is never justified.’  Unlike a regular debate in which people contribute views and argue points in the form of a class discussion, this was conducted in silence on a large sheet of paper.  Students were encouraged to write down anything that came into their thoughts related to the statement which they were considering. There were no right or wrong responses.

After a couple of minutes, each group moved on to a different statement.  They read the comments from the previous group and added to them: ticking or crossing responses they agreed or disagreed with; asking questions about what the previous group had said, and, of course, offering their own ideas.

By the time the groups got back to their original sheet, every other member of the class had contributed: agreeing or disagreeing; expanding; or just posing additional questions.

All of the students found this a great way to ‘discuss’ the issues, as everyone had the chance to put their point of view across, rather than the debate being dominated by the few more confident speakers.