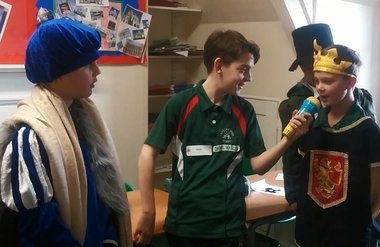 On Thursday 9th March some students from Years 6 and 7 spent an hour learning about Bastille Day. After finding out what it was all about, the pupils had great fun working in groups to create news bulletins. We had a group of unruly peasants being interviewed about their living conditions in the days leading up to the storming of the Bastille. This was followed by an interview with Marie Antoinette and Louis XVI, asking if they were concerned by what was going on at the Bastille. This was rounded off with another news bulletin from 14th July 2017, in which revellers were interviewed about how they were celebrating and recalling the events of Bastille Day. Pupils had a great time and the interviews, not to mention the costumes kindly loaned to us by the History Department,  which were outstanding.

Teacher of French and Spanish